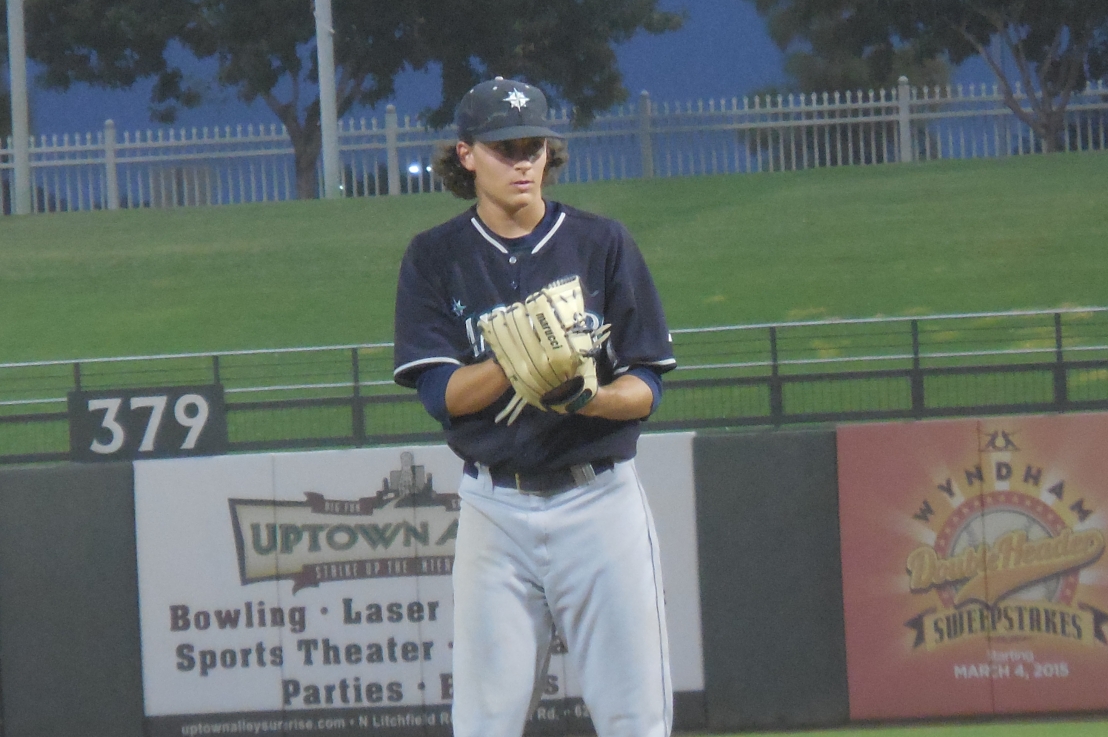 I first saw Nick Neidert in the 2015 AZL after he was selected in the second round by the Seattle Mariners. He absolutely dominated in his 11 starts that season and was eventually traded to the Miami Marlins along with Christopher Torres and Robert Dugger in exchange for Dee Gordon. He has only pitched as a starter as a pro but will likely see his debut come as a reliever, although moving back to the rotation is a definite possibility. He has a good fastball, but it is made even better by the fact he has a changeup that flashes the potential of a plus offering. When in the pen, he will rely heavily on these two offerings, both of which he can put right where he wants, but he can also mix in a solid slider and a get-me-over curve as well.

Jordan Holloway’s draft round is misleading, as he slipped to the 20th round due to signability concerns, but eventually opted to turn pro. At 6’6” and 230 lbs. with a fastball that has touched triple digits, he has the chance to be an impact reliever for the Marlins. He has worked almost exclusively as a starter in the minors, but his lack of command and a change that is incredibly inconsistent has long made it a long shot for him to be a viable rotation option at the big league level, but the big curve and power fastball to go with excellent length and extension are tailor-made to be a high-leverage reliever.

After four years at D-II Cal State East Bay, the Miami Marlins got a clear steal in the 17th round when they took Alex Vesia in 2018. He pitched at two levels that season and put up an ERA of 1.35 over 14 outings and 33.1 innings. In 2019 he managed to see time at three levels, threw exactly double the innings as the year before, and put up an ERA of 1.76, including a cool 0.00 in 16.1 innings at Double-A. he capped off the year with over ten scoreless innings in the Arizona Fall League. He brings a fastball that sits up to 95, a change that has plenty of fade, and a curve that is quite effective against fellow lefties. He should settle in well as a middle reliever, which is a fantastic return on the Marlins $25k investment coming out of the draft.

The final piece to make the Marlins bullpen is one of the best young personalities in the game, Rule 5 pick Sterling Sharp. He was another low round selection, going in the 22nd out of Drury University, a D-II school he transferred to from Eastern Michigan, to the Washington Nationals. Sharp impressed in the AFL this Fall after seeing time in Double-A each of the past two seasons. He has an outside shot at eventually finding his way into a rotation thanks to a three-pitch mix that features an above-average fastball and change to go with a slider that is still below-average at this point. He has walked less than 2.5 per nine innings in his minor league career, so he knows how to pound the zone.

This site is owned and operated by Shaun P Kernahan. Please feel free to contact Shaun for any questions regarding this site.